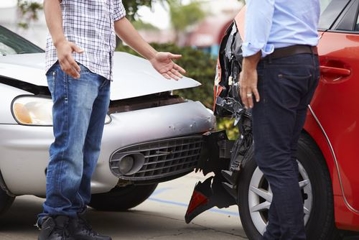 Our St. Louis personal injury lawyers of Meyerkord & Kurth have won a six-figure verdict for a client who was injured in a car accident caused by a distracted driver. According to statements made during the trial and investigations, the liable driver was reaching for his cellphone at the time of the accident. He had apparently dropped it in front of the front passenger seat, leaned to grab it, and rear-ended our client. Jurors chose to award our client $200,000 for his damages.

Although the driver was not technically texting behind the wheel, it is clear the accident was caused by cellphone use. In fact, the defense actually admitted that their client was responsible for the crash back in 2015, not long after it occurred. However, the defense team did contest the extent of our client’s injuries.

Medical records showed that our client suffered a wedge fracture in his back, a concussion, and several back injuries as a result of the collision. The defense claimed x-ray scans did not show evidence of the wedge fracture. To defeat their challenge, our attorneys hired a neutral third party neuroradiologist to study the scans. We did tell him if we represented the defense or the plaintiff, nor did we say what sort of accident was implicated in causing the injury.

The defense also tried to reduce liability by pointing to a lengthy gap of treatment that occurred after our client received initial medical care. We carefully constructed a cinematic deposition that kept the jury engaged with clear, explanatory visuals and testimonies. In the end, expert opinions and creatively presented evidence won over the jury, convincing them that a $200,000 verdict amount was more than justified for our client.

Read more on our Press Release.

To learn more about this recent case victory, you can click here to view a full press release from Missouri Lawyers Weekly. (Login information or subscription may be required.) Would you like to know more about Meyerkord & Kurth and our St. Louis car accident attorneys? Please call us at (800) 391-4318 any time you need help with a case of claim of your own. Initial case reviews are free!